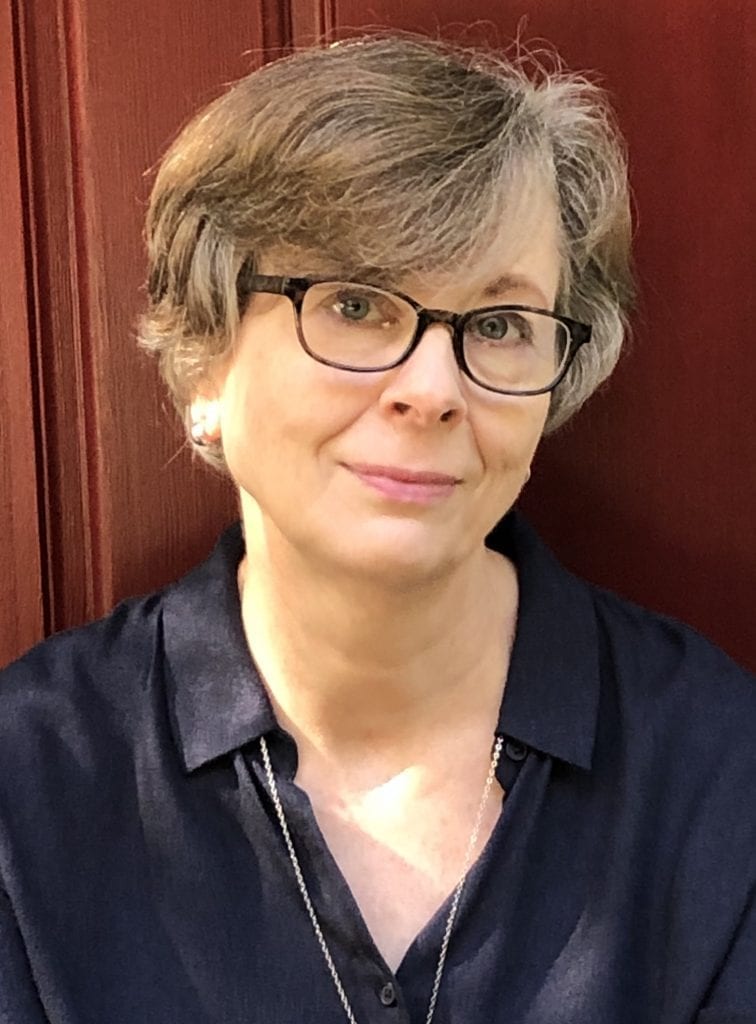 Betsy Uhrig was born and raised in Greater Boston, where she lives now with her family and even more books than you are picturing. She graduated from Smith College with a degree in English and has worked in publishing ever since, mainly as a copy editor. She has also worked as a bookseller and an ice-cream scooper. She writes books for children instead of doing things that aren’t as fun. Double the Danger and Zero Zucchini is her first novel. Normally she goes out of her way to avoid danger, and she really has nothing against zucchini.

Here are some possibly interesting things about me that wouldn’t fit in the official version above.

An actual pile of books in my home. These belong to my husband, who sells books professionally, so they aren’t necessarily here to stay. Mine are tidily lined up on shelves, except for the ones piled on the floor next to the bed. And the ones under the desk. And the ones over there. If you ever visit my home, you will be asked to take some books with you when you leave. It would be rude to refuse. 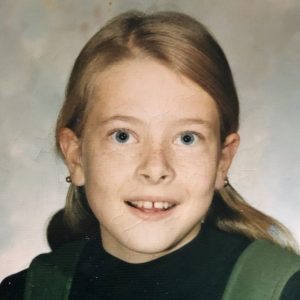 Here is a picture of me when I was in fifth grade. These drab colors—almost actual camouflage—were typical of my outfits at the time. I tended to want to blend in, although, since I didn’t live in the jungle, I’m not sure these were the best color choices. My tastes haven’t changed much (clothing pun!) since then. I still consider a navy turtleneck flamboyant.

I was lucky enough to attend elementary school during a time when kids were allowed to work on their own a lot, and learn by doing, and (if I’m any example) not learn math at all. So I spent a lot of time writing. Here are two stories from two different handwriting periods in my life. Note that both of them have the word scary in the title. (Technically one of them is scarry, but I meant scary.) The two stories aren’t related—in fact, one seems to be about me and the other about a groundhog. But both characters are having a scary (scarry) time of it. I guess I instinctively knew even then that a little danger can liven up any story. 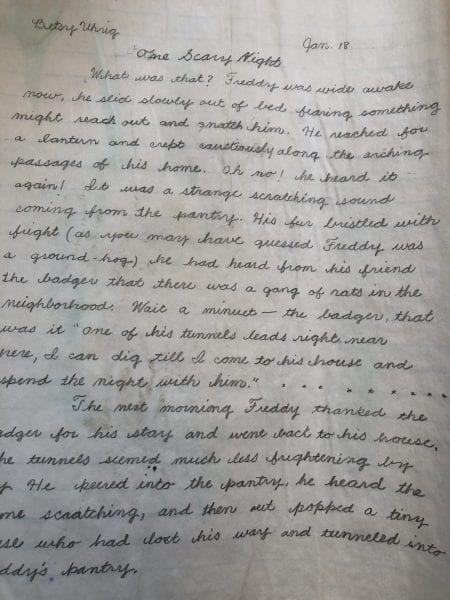 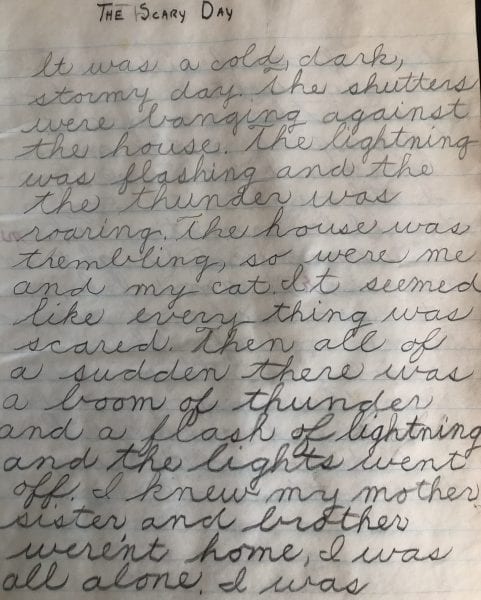 I have two cats, brother and sister named Max and Ruby (after the Rosemary Wells characters). Here are some pictures of them being absurdly cute, which is their full-time occupation. 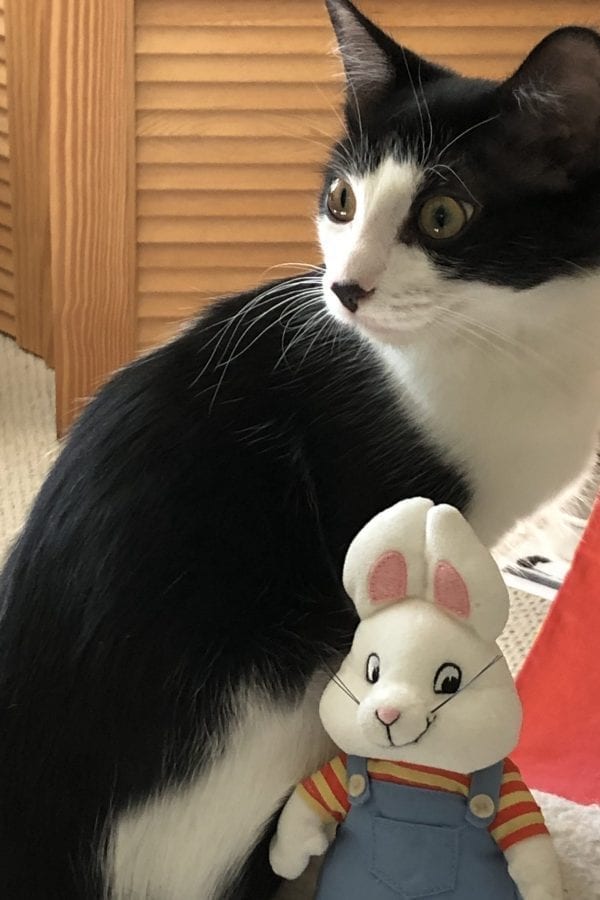 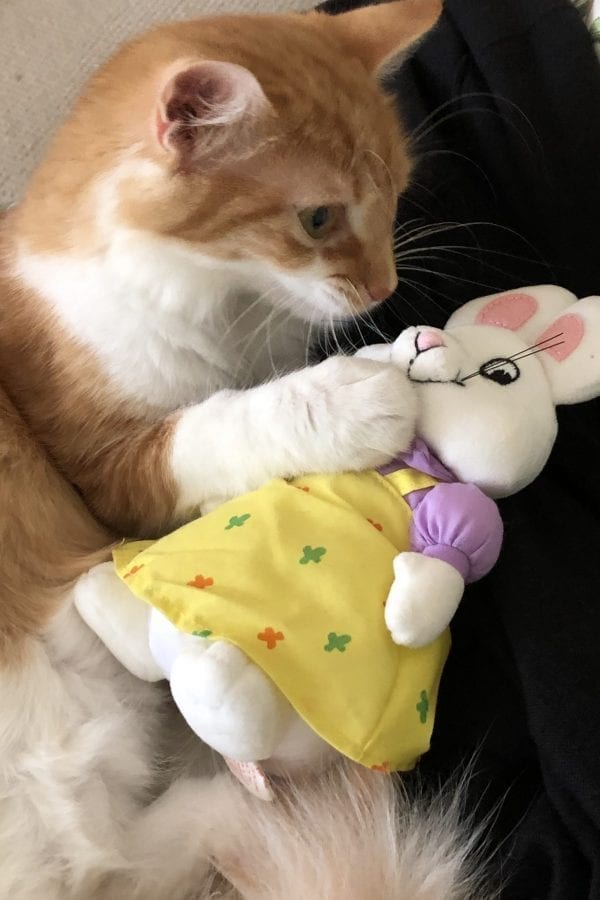 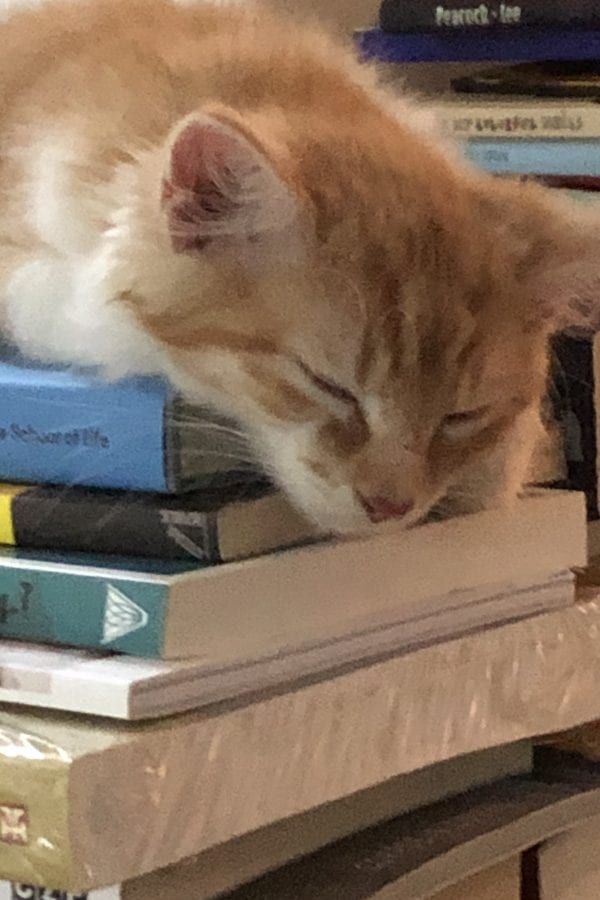 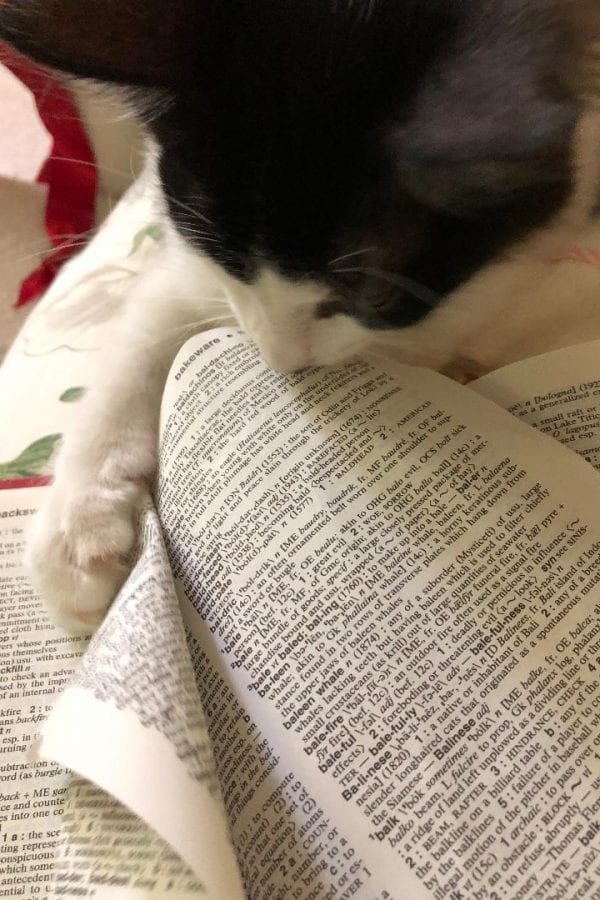 Max has a more complicated relationship with the written word 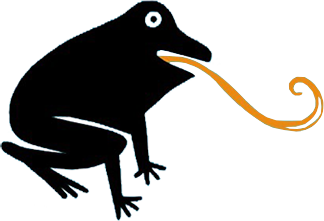 Here are some questions that no one has ever asked me, but maybe they’re just shy. (Click on a question to see the answer!)

How do you pronounce your last name?

How many books have you written?

A lot! But Double the Danger and Zero Zucchini is the first to be published. I hope more will follow.

What kinds of books do you like to read?

I will read almost any novel with (A) a map, (B) a family tree, and/or (C) time travel. I also like reading about books and librarians. So if you hand me a book about a time-traveling librarian and there’s a family tree with the librarian’s ancestors and a map of the library, I will be all in.

By the way, I didn’t know this when I was a kid, and I wish I had: If you have a particular interest in books about, say, talking waffles who move to Hollywood and are only offered parts as breakfast foods but overcome the odds to win an Oscar as Joan of Arc, you can tell a bookseller or librarian and they can suggest titles for you. (I think you’re out of luck in the specific case above, but it never hurts to ask!)

What made you decide to write books?

I hope this won’t come as a surprise to those who know me, but I am a huge worrier. I have a tendency to imagine horrible results from almost any minor event. I could eat a slightly squishy grape and imagine that I am about to get Squishy-Grape Poisoning and end up in a hospital bed, surrounded by my loved ones, who look concerned but are actually thinking, “Why would she have eaten that squishy grape?”

So I decided I should send my overactive imagination outside for some fresh air instead of letting it fill my mind with worries all day. And writing books seemed like a productive use of its energy.

Did it help? Asking for a friend.

It did! Not completely, of course, but tiring out my imagination on the writing jungle gym makes it less apt to concern itself with squishy grapes and other perils. Tell your friend to give it a try.

Questions About Double the Danger and Zero Zucchini

Do the Gerald books exist? Can I read them?

I made up the Gerald books. They don’t exist beyond the little plot descriptions in Double the Danger. But if you want to write a Gerald book or story, feel free! I’d love to see what you come up with.

I am one of your nephews. I can’t help but notice how many injuries Alex sustains in the course of your book. Not to mention getting peed on. And he is nothing but helpful to his aunt. What, exactly, do you have against nephews?

Nothing, I swear! You’re all great and I would never wish any harm to befall you. Plus, Alex’s injuries are really pretty minor, and the rain probably washed most of the pee off.

I am one of your nieces. Why isn’t the main character in the book a niece instead of a nephew? What, exactly, do you have against nieces?

I suggest you read the nephew Q above and consider yourself lucky. But seriously, when I started the book, I thought Alex was a niece. I couldn’t get past the first page until I admitted I was wrong.

I am a zucchini, as are many of my friends and relations. What, exactly, do you have against zucchini?

Well, this is awkward. I wasn’t aware that zucchini read books, so what a surprise to hear from you! To answer your question: I have nothing against zucchini—in moderation. But sometimes you guys can come on a little strong, especially in late summer. Anyway, I picked zucchini because—and I hope this doesn’t come as a surprise—many kids don’t like it. On their plates, at least. In their books is another matter, and every kid will have to decide that individually. Thanks for writing!

Have you ever personally found books to be dangerous?

I’ve gotten a few nasty papercuts, but other than that, books have been very kind to me. One time, though, a book almost ripped my tongue out. This was my fault, not the book’s.

It was early elementary school, and my class was sitting in a circle, taking turns reading from a thick hardcover book of stories about some bland kids and their pets. We each had our own copy. It looked like it was going to be a while before my turn to read came up, so I started fiddling with my book. And you know how sometimes you forget that you’re in public and just do whatever crosses your mind? It occurred to me to stick my tongue in the book, like a bookmark, and then close it. So I did.

If you’re thinking this is no big deal, try it sometime. Once I’d closed the book, I couldn’t find the page where my tongue was. The book was heavy, so it was kind of pulling on my tongue. And now my turn to read was in sight, and I started to get increasingly frantic. I scrabbled through the pages desperately, and then, even more desperately, I tried to just yank my tongue out of the book. Never do this! It felt like I was going to rip my tongue out of my head. Then, before I was called on to read, I figured out that I would have to go in from the top—wedge my finger in right beside my tongue and pry the pages apart. This worked, which is why I still have a tongue.

PS: Many years later, when I was a full-grown adult, I questioned my memory of this incident. So I put my tongue in a book again! That time I learned my lesson for good.

Is Marta cutting her bangs all the way off based on someone you know?

Worse. It’s me. And even worse than that, I didn’t do it to myself. I did it to my younger sister. I’m still ashamed. Not of the bangs, which weren’t that bad at first. But of my panicked attempt to remove the evidence by cutting them all the way off. The cover-up is always worse than the crime!

If you’re interested, here’s what happened in more detail.

Our family went on vacation for a week one summer, and my sister and I decided it would be fun if, when we returned, we pretended to our friends across the street that we were a different family. Don’t overthink it—we certainly didn’t. So we needed a disguise for my sister. (I guess I thought my new vacation freckles were enough for me.) And that disguise involved giving her bangs. Which makes no sense, I know, except what about Superman? People don’t recognize him with just a pair of glasses. So maybe don’t judge.

I remember standing in our parents’ bedroom in front of the big mirror, wielding the Haircutting Scissors. I remember cutting my sister’s hair. I don’t think there was an actual stated rule against cutting our own hair. There didn’t need to be. It was just obvious that neither of us had clearance to be using the Haircutting Scissors on ourselves. Even cutting our dolls’ hair, which we did a lot (our bride doll had a crewcut, though she had the cheekbones for it), was frowned upon. So now I was going to be IN TROUBLE.

In that moment of panic, I made a snap decision. I decided that if I cut the bangs all the way off, no one would be able to tell what I had done. If you’re keeping count, this was the third bad decision in a rapid succession of them. Of course anyone could tell what I’d done. My sister wound up with a row of stubble across her forehead instead of some uneven but rescuable bangs.

Let’s just spare a thought for my sister here. School hadn’t started yet, so she had to begin a whole new year with the world’s weirdest haircut. I don’t remember much about the parental fallout, except that yes, I did get IN TROUBLE, more than my sister—the victim in my parents’ eyes—did. But when the bangs grew out a bit, they were actually pretty cute.

Is there photographic evidence that (A) this happened and (B) it ended up pretty cute?

Yes, there is. This is her school picture from that year. 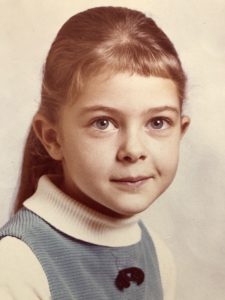